Pixels allow the lighting display designer to have the ability to control each individual light element separately, both brightness and color.

You are no longer limited to controlling entire strings of lights, instead you have the ability to set each and every LED on each and every string to the specific color and intensity you choose.

The typical RGB pixel string is, in appearance, similar in many ways to a standard string of LED lights, but there are several important differences:

Each light actually has 3 separate LEDs inside, red, green, and blue.

They are very close together so that by mixing these 3 primary colors, virtually any color in the spectrum can be obtained.

Each LED element is larger, because each pixel conntains a tiny circuit board with a small microcontroller.

It's that 'chip' in each pixel that allows each and every pixel to be controlled independently.

Pixel strings are wired with either 3 or 4 wires, depending on the type of control chips used, instead of just 2 wires.

Pixel strings don't just plug "into the wall", they have to be connected to a pixel controller.


Though the technology involved is quite complex, putting together an RGB pixel system need not be.

You need 4 basic pieces to make a complete pixel system:

Virtually all RGB pixels are manufactured in China.

The best place to purchase pixels is Ray Wu's store on Alibaba.

He has a good selection and good pricing.

The down-side is that shipping is quite expensive and the return process can be impractical as a result.

Ray has had consistently good reports of dealing with any issues that may arise.

Alibaba holds your funds until you notify them to release funds to the seller, so you do have protection if your order doesn't arive as expected.

Ask questions up front, rather than be surprised later.

Ray will often come up with lower shipping costs than the Alibaba calculator quotes, so please make it a point to email him for a quote rather than just placing the order online.

You should keep in mind that we are talking about a mass-produced product, and if you order hundreds or even thousands of pixels, it's probably not realistic to expect 100% working

pixels. Although Ray is good about sending replacements for bad pixels, what you'll get is individual pixels, it'll be up to you to wire them in, in place of the bad ones.

Pixel style selection is usually based on what you're planning to light.

Pixel strips can be used for windows, gutters, rooflines, etc.

The main restriction with pixel strips is the bend radius, they can't make sharp corners.

Pixel strips usually have 3 tri-color LEDs per pixel, so you will be lighting up 3 adjacent lights at a time.

Strips are very bright, but also the light is directional.

Pixel voltage is another choice. 5 volt and 12 volt pixels are the most common.

Pixel strips usually use 12 volts, but pixel strings can be 5 volts or 12 volts.

50 pixels is a common limit for 5-volt pixel strings. Some 12-volt pixels can have strings as long as 128 pixels.

Pixel controller chip type is another selection to make.

You must choose pixels that use a control chip that your pixel controller supports.

Some pixels use 3 wires, some use 4, it just depends on the control chip type.

Another important consideration when choosing pixels is the number of different intensity levels:

4-bits of intensity, or 16 dim levels, is what the GE ColorEffects pixels offer. They are not suitable for slow, gradual dimming.

12-bit dimming is the advantage of the TLS3001 pixels, for 4,096 dimming levels. Although you don't need 4,096 intensity levels, there are some significant advantages to having 12-bit capability:

Since there is little cost difference between pixel types, we recommend the 12-bit TLS3001 pixels because of the versatility of the 12-bit dimming range.

I'm going to try not to bore you here.

If you've worked with standard incandescent 'mini' strings and standard LED strings in the past, you've probably noticed that they don't behave at all alike when you dim them.

That's because incandescent lights become much less efficient as they are dimmed, in other words the amount of light given off drops off a lot faster than the amount of current being sent to them.

Incandescent bulbs are non-linear. LEDs, on the other hand, are very linear, the amount of light they give off varies directly with the current through them.

The way it happens to work out is that the non-linearity of incandescent bulbs and the non-linearity of the human eye essentially cancel each other out, and the result is that as we go from 0 to 100% intensity on an incandescent bulb it appears as a nice smooth transition to the human eye, whereas the linear dimming of an LED light appears very non-linear to the eye, it seems to jump from off to a pretty bright value right away.

And that's the reason we need 4,096 dimming levels that the 12-bit pixels give us. We only use 256 of them, because the DMX standard only supports 256 levels. But what we can do is pick which 256 of the 4,096 available levels that we'll use, and we pick them in such a way that our dimming steps are very small toward the dim end of the range, and gradually become larger as we get brighter.

This process is called Gamma Correction, and what we are essentially doing is making the linear LED appear to be non-linear, in a way that makes it's dimming curve close to that of an incandescent bulb. Not only is it more pleasing to the eye, but in a display with both RGB pixels and incandescent minis, both types of lights will have the same dimming curve.

Another benefit of 12-bit pixels and gamma correction is if we want to assemble a large grid or matrix of pixels, and actually use it to display still or video images. Yes it can be done, the technology is just like that used in the 'jumbo' video displays at stadiums. Without gamma correction however, images appear to be washed out. With gamma correction it's possible to display vivid lifelike images on an RGB pixel array. 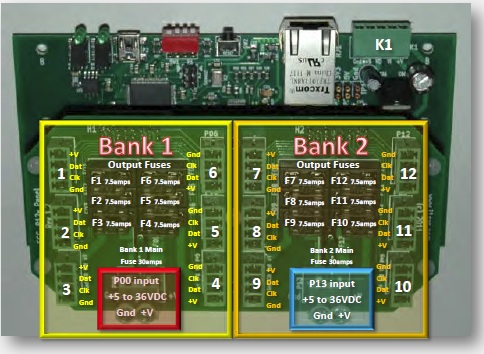